Mandu excellent offbeat destination, this place is the testament to the love between king Baaz Bahadur and Rani Roopmati. One can actually relive the bygone era here. This epitome of architectural excellence recently won the award for "Best Heritage City" during the National Tourism Award ceremony held in New Delhi on World Tourism Day.

The slow soothing pace of Mandu makes you forget the fast moving time and you literally enter a world of its own. Dotted with monuments, tombs and lush green gardens, Mandu is a fine example of rich heritage. The striking monuments of Mandu consequently combine the assertion of Afghan mode with the great cultural heritage of the Turkish people. Like most eclectic creations that borrow the best from two cultures, Mandu is uniquely impressive. Let's take a look at its astounding heritage which makes it the best heritage city.

As one climbs up the hill from the palace, one can reach Roopmati's pavilion The grandeur is built with arched structures and the monument speaks about the romantic history of king Baz Bahadur and Rani Roopmati. The palace also has a cistern that is useful for rain- water harvesting and Roopmati Palace makes for one popular tourist attractions in Mandu. 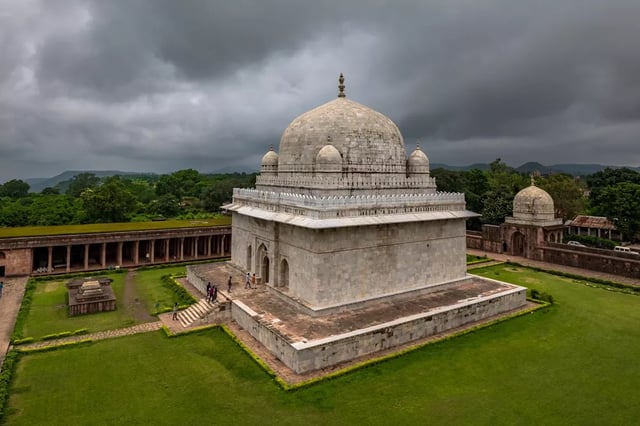 Hoshang Shah's tomb is entirely constructed in white marble. What strikes the viewer instantly about the tomb is its austerity and the massive celestial white tomb. It is said that this domed marble tomb inspired the builders of Taj Mahal in Agra. The other attractions include carving of lotuses and blue enamel stars set in masonry. 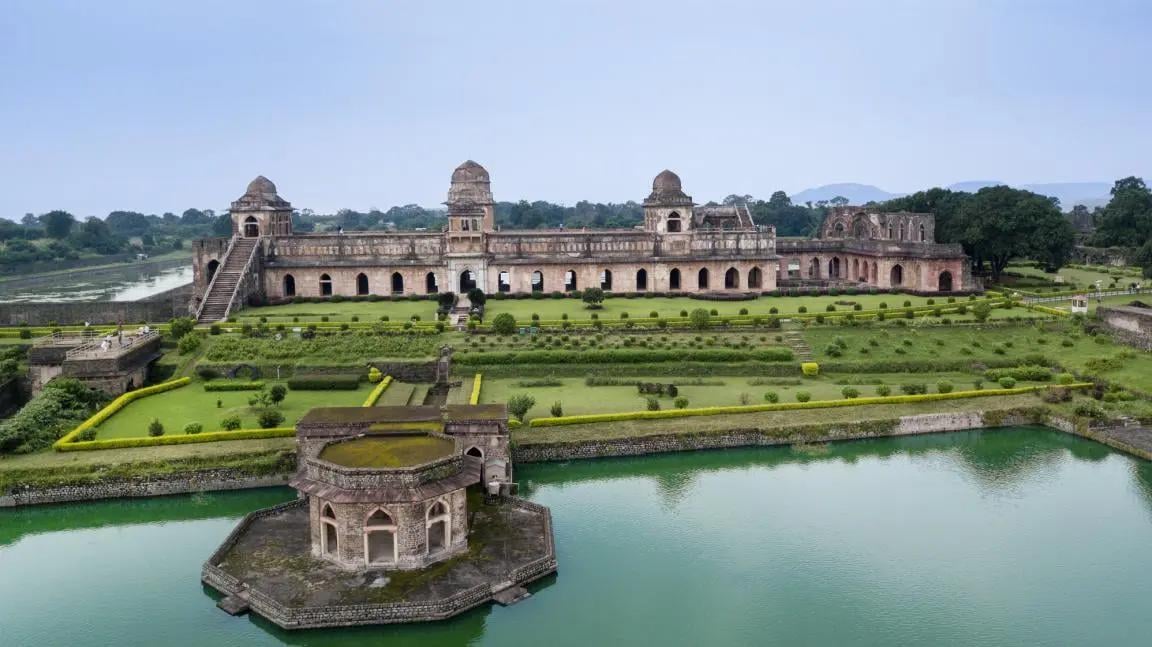 One of the best monument which perfectly captures the medieval romance of Mandu is Jahaz Mahal. Said to be built by Sultan Ghiyasuddin Khilji for his large Harem in latter half of 15th century, it represents the classical phase of architecture in Mandu. This double storeyed structure situated on a narrow strip of land between Munj Talao and Kapur Talao gives it an appearance of a ship anchored in water. 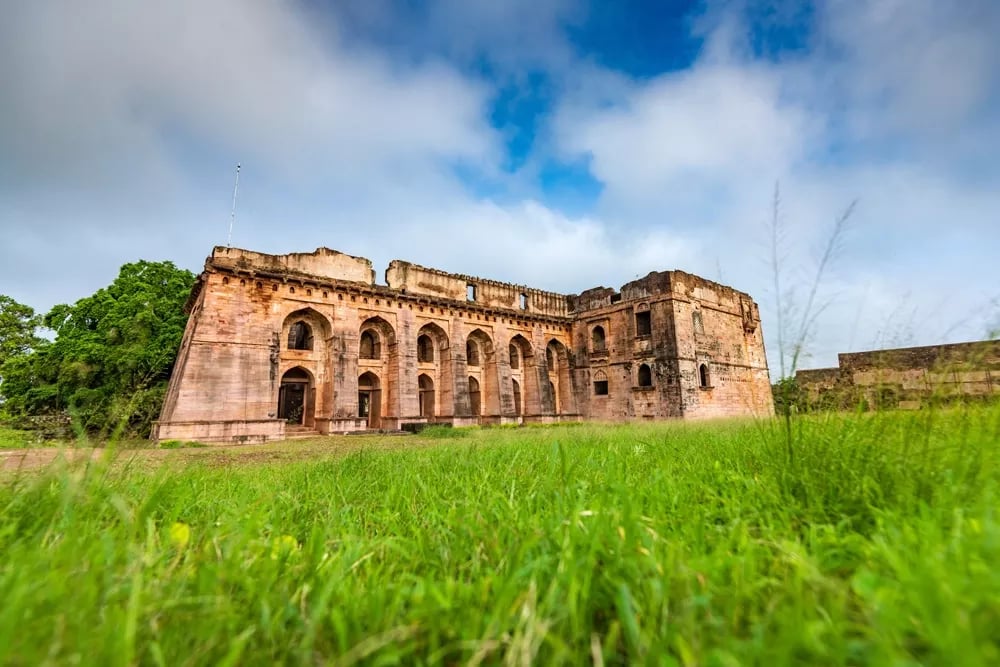 Hindola Mahal also known as swinging palace derives its name due its sloping walls. The structure is shaped like an alphabet 'T'. Architecturally it stands different from that of other monuments in Mandu on account of the simplicity of the construction. The traverse projection had two storeys, the upper storey being reserved for the use of the Royal ladies. A flight of sloping stages led to the upper apartments which plausibly allowed the ladies to go up sitting in a palanquin. The Ashrafi Mahal was built as a madrasa (Islamic college) by Hoshang Shah and it was a quadrangle with rows of cells and arcaded corridors on the outside, and four corner towers. Mahmud Khilji of the following dynasty converted the northwest tower into a seven-storey victory tower, and roofed the courtyard as a platform for his own grand marble tomb. 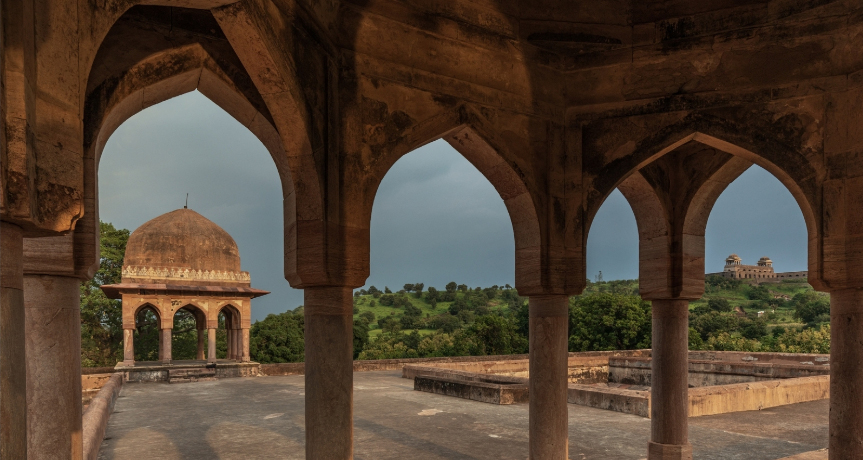 Baz Bahadur Palace is an interesting blend of Rajput and Mughal style. The main gateway to the palace is approached by 40 broad steps with landing at intervals. The main part of the palace is a spacious open court with halls and rooms on all four sides. These halls besides the king's personal spaces were used as meeting point for the public and court officials.

Situated on the left bank of the river Saraswati, Lal Bagh Palace is class and grandeur personified. Resided by one of the most powerful Mara ...

From prehistoric caves to Guptas to Rajputs to Marathas to Mughals, the landscape of Madhya Pradesh is a map depicting passage of time, embro ...

Maheshwar is a historic fort town, a well-known pilgrimage site, and a home to traditional weaving. Maheshwar, also known as Mahishmati or Ma ...

Gwalior Fort: The pearl among the fortresses of Hind

Madhya Pradesh is commonly known as the 'Heart of India', an epithet that perfectly suits a state located geographically and histori ...

The land of magnificent architecture, Madhya Pradesh, has a magnitude of marvels located in different regions that play a significant role in ...