It is the design on the Maheshwari sari, which draws inspiration from the eponymous fort, the Narmada river and the local flora, which makes it unique, writes Uttara Gangopadhyay

If you happen to move beyond the usual tourist circuit of the grand Ahilya fort and the Narmada River flowing beneath it, and explore the many narrow lanes of Maheshwar, a small town in Madhya Pradesh, you will be greeted by a regular clacking sound coming from many of the homes. It is the sound of the shuttle passing back and forth. It is because Maheshwar, a historical and pilgrimage town, forever coloured with the memories of Queen Ahilyabai Holkar, is also home to a unique hand woven sari, which was introduced by the queen herself.

It is said that after the queen shifted the capital from Indore to Maheshwar, among other things, she introduced the hand weaving of saris. To help the local people learn the trade, she invited weavers from Malwa and Gujarat to settle here. They made the traditional 'nauvari' sari with unique design elements. The town lent its name to the sari, and thus the Maheshwari sari was born. The queen herself wore the locally made sari and gifted it to the nobility too.

According to the weavers of Maheshwar, it was the queen who designed the first sari. Traditionally, the saris have designs on the border and five stripes on the 'pallu' or the 'anchal'; the body is plain. The saris were made of the finest hand spun cotton and were comfortable to wear during the summer of the central plains of India. The threads were dyed with organic colours. The early weavers drew inspiration from the fort, the Narmada River, the temples and the foliage. Some of the popular motifs included the fort wall, 'lahariya' or the waves of the river, flowers such as 'aak' and 'chameli', etc. 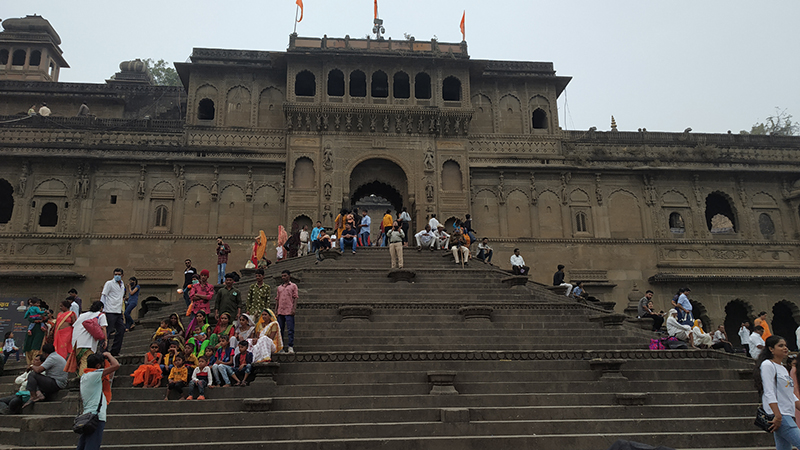 However, with the dwindling of royal patronage and the introduction of power looms after Independence, the weavers of Maheshwari saris found it difficult to cope with competitive pricing. Most weavers today acknowledge that probably the craft would have been lost forever if it was not the intervention of the royals, Richard Holkar and his wife Sally Holkar, who were visiting Maheshwar in the 1970s. It is said that a practising handloom weaver informed them about the predicament of the community. In 1979, they started the REHWA Society, which breathed fresh life into the dying craft.

They chose a corner of the fort premises where Queen Ahilyabai had erected a small Shiva temple and invited Brahmin priests to pray for the welfare of her subjects. Today, this complex hums with the noise of looms. Visitors to Maheshwar Fort can catch a glimpse of some of the weavers working on their looms through windows cut into the fort wall as they climb the stairs leading from the Narmada river bank to the Ahilya gate. The sales counter of the society is also located here.

Interestingly, the Rehwa Society not only revived the traditional craft but also became a tool of women empowerment. Traditionally, the weaving industry in Maheshwar has been male dominated with women assisting with ancillary services and not even getting paid for their labour. Women were not encouraged to go out and work. 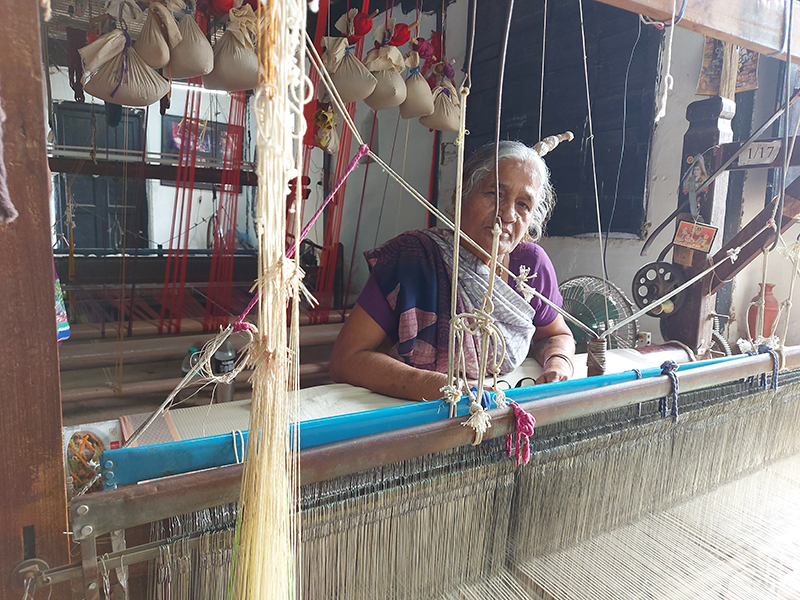 Sandip Soni, a project manager with the Society, said the Holkars encouraged women to come forward to train as weavers and ensured they got the necessary support too. The employees enjoy medical facilities, which includes a hospital. A creche for infants of the working mothers and a school for the older children of the weavers were also started. The Ahilya colony was set up to provide residential support to impoverished families. Women weavers, like Chandra Bai and Suman Bai, who have been working here for over four decades, narrate how the Society became their beacon of hope when life had dealt them severe blows. At a time when we hear of children of artisan parents shunning traditional crafts, many in Maheshwar have taken up employment here and work beside their mothers.

The Society is also helping women weavers scale new heights. Recently, Sangita, an expert 'jhala pala' weaver, has risen to the position of a Unit Master which, according to the Society, is a rare honour in this otherwise male-dominated world.

While the Society is focused on preserving the Maheshwari sari and its traditional designs, they have also introduced contemporary designs and products, such as unstitched dress material, shawls and stoles, etc. to cater to the demands of the modern market. Apart from pure cotton saris, the weavers use a mix of cotton and silk or wool and silk to make the saris, and 'zari' to embellish the designs. 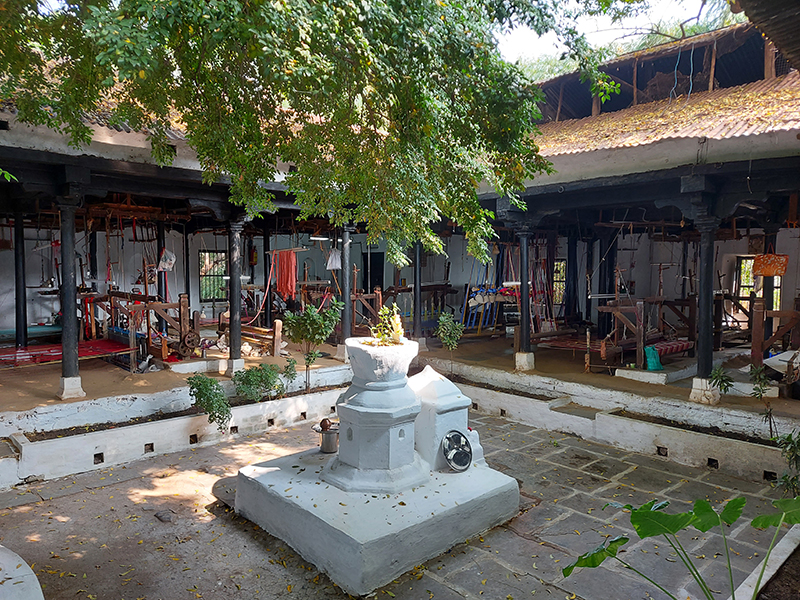 Outside the Rehwa Society, there are several weavers' colonies dotting the town. Usually, the homes of the weavers also serve as their workshop. While most weavers welcome visits to their workshops, they may not entertain visitors during peak working periods.

Madhya Pradesh Tourism (MPT) has introduced walking tours around Maheshwar where visitors are taken on a guided tour of the town where participants are told about the history of Maheshwar, the legacy of Queen Ahilyabai, the laborious process of hand weaving of saris, and taken on visits to the weavers' colonies, with an opportunity to buy directly from the weavers. Those keen to go on these walks may contact the tourist reception centre of the MPT Narmada Resort. Interestingly, the Resort's restaurant is also a reminder of the town's heritage with many of the decor carved out of shuttles and parts of the loom.

Even if you do not have time to visit the workshops or join the walk, you may pick up this now globally famous hand woven sari from the many shops which dot the town.