The journey did not seem to end. It almost felt like we were plunging deep into the recesses of the earth. Our destination was the mythical and mysterious Patalkot Valley, a horse-shaped valley surrounded by hills, layered with granite and sandstone rocks,  carpeted by medicinal herbs and plants in dense forests, and home to a handful of tribal villages huddled next to each other. Our tryst with the Bharia tribe of Madhya Pradesh started with this hidden valley. It was the second day of the Times Passion Trail with Madhya Pradesh Tourism and our first foray into the tribal heartland of the state as we drove into Patalkot Valley. The bus stopped near Tamia and we were packed into two matadors, (one of them came with a colourful bed) as we chugged our way through the treacherous mountain roads, surrounded by dense wilderness Montages of tribal villages whizzed past us as  Dr. Vasant Nirgune, our Experience Architect told us that there are 12 villages that are inhabited while another  13 were empty lands,  cultivated by the tribes - mainly Bharias and Gonds. In fact, the Bharia tribes, who consider themselves as younger brothers of the Gonds have been living here, isolated in this valley for over 500 years. Legends of the Patalkot Valley

Patalkot Valley is indeed steeped in mythical folklore as it was believed to be the haunt of Meghnad, son of Ravana who they worship apparently and the Patalkot valley was believed to be their portal to Patal-Lok. Meghnad, who was considered the God of Rains was worshipped by the tribes, an agrarian community for the fertility of their crops and some villages have a pillar called Magnad Stamb in the vicinity. As we finally reached Kharyam, one of the last tribal villages, we understood why it was called Patalkot. It was early evening but the hills wrapped the hamlet in its fold, literally shutting out the light. For a moment we felt that we were lost inside the crevices of the valley. I was told that during winters, one gets barely six hours of natural light and most of the valley is impenetrable during monsoon. Kharyam has another legend attached to it, that took me back to my childhood -  the story of the demon Bhasmasura. The demon got a boon from Lord Shiva that if he places his hand on anyone, they will reduce to ashes. The cheeky demon tried the stunt on Lord Shiva himself who vanished and plunged into Earth, creating this massive hole. The demon was later tricked by Mohini, the female form of Lord Vishnu to place his hand on his own head as he burst into ash. 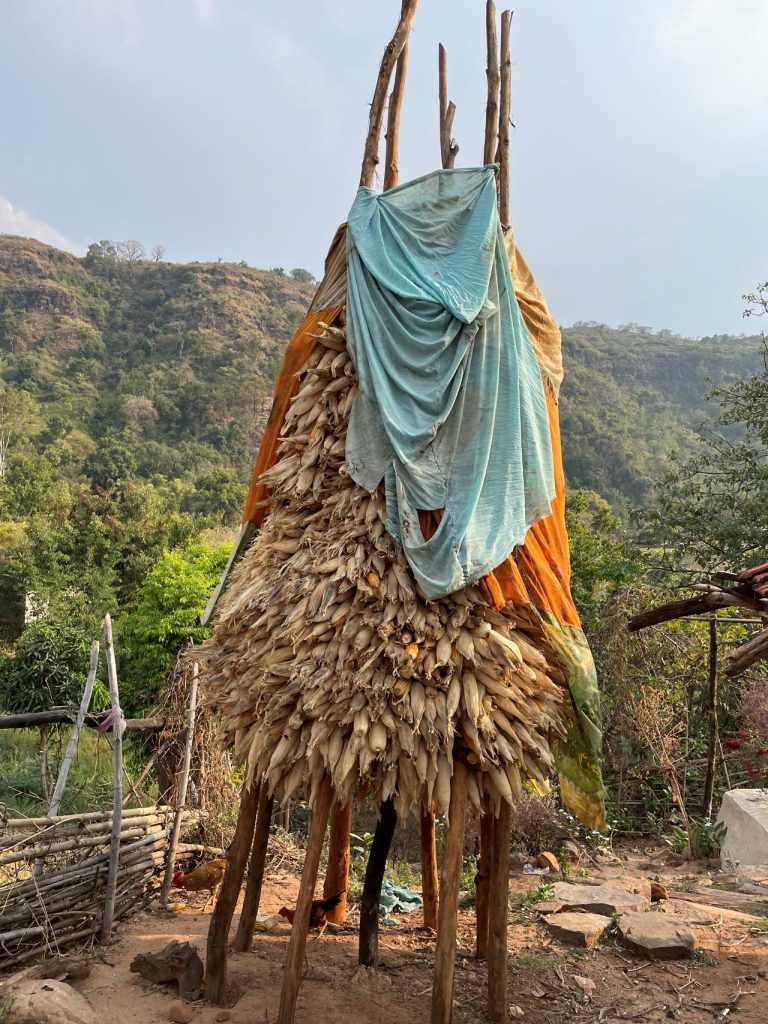 Another legend refers to the Ramayana, where Sita vanished into Mother Earth, into the lap of her mother and it was called  Sita's Patal Pradesh, according to the tribes.  Indeed the entire valley seemed like a deep pit shaped like a bowl, surrounded by hills and forests. The  Bharia tribes have virtually been the exclusive inhabitants of the land and hence they are titled Bhumia or Lord of the Soil. Bhumia is also the title given to the village priest. As traditional healers or  Bhumkas, with expert knowledge of the flora, they know every herb and shrub in the valley and their medicinal and toxic qualities. They are aware of every hidden route and path in the mountains and can navigate their way through the wilderness. Historically, they say that the Bhonsle kings had dug a hidden tunnel and had escaped the British through this underground passage. Although roads have slowly been paved here, the valley itself has been discovered only recently. The Bharias may have lived in isolation for years, but it has probably made them self-reliant. The Dravidian tribe had virtually been cut off from the outside world until recently and hence they have adapted their lifestyles and customs around their environment.  As we interacted with them, they were warm and hospitable, opening their doors to us and giving us a peek into their lives, which gave us the true meaning of sustainability. " Jungle aur Pahadon mein rehne ke liye, hamein aur kya chaiye." Simplicity is a way of life. Less is more. Natural resources are not exploited. "We have what we need." In one of the thatched houses of the tribal village, I met little Kasi, looking rather resplendent in a bright yellow dress and twinning with the flowers in the garden. There were a few goats wandering around and one of the kids came up to us. Kasi was a bit shy, deliberately avoiding a bit of eye contact, but we soon became good friends. This carefree but curious child walked with me as I pottered around the village, talking to people who invited us into their homes. We visited her grandparents who were kind enough to allow us to see their homes. Stacks of colourful corn lay scattered around at the entrance, These houses are built with natural materials be it wood, stone or bamboo, and are rather sparse but self-sufficient. A couple of cots, some household articles, simple earthenware pots, and pans were all that they needed. Even the kitchen was traditional but minimalistic. I made a simple note to self-, not to hoard or clutter. A few of the bigger houses had an open compound with gardens while others stacked corn near the entrance. Some houses had no doors and there was just a curtain or a fence and everything was simply rustic, raw, and real. A single toilet was located behind the main home. Chickens and goats merrily pranced around while a couple of dogs were in a deep siesta. Haystacks and coops for birds were located in the compound. As we walked around, we chatted with some of the villagers who were sitting on the verandahs. A lady was lying down, saying she was a bit exhausted, while another was returning from the fields with some vegetables, mainly tubers, and greens in a basket. Some were preparing dinner as sunset was approaching. Kasi merrily walked along with me as we met another woman who was selling handcrafted products made of local wood. There were a few cups and some figurines shaped like snakes, and mongooses among others. I brought home a small cup, which was hand-painted by another Gond artist. Most of the Bharias are artisans, creating arts and crafts out of bamboo and local wood and other sustainable handmade products. The older generation of the Bharia tribes may have been disconnected from the urban world but the younger generation is keen on being a part of it and also on education.  We met both men and women who are graduates, one of the girls had graduated in Arts while another man was a Post Graduate in Maths. Even little Kashi said that she goes to school. The entire valley is rich in herbs, berries and medicinal plants and the Bharia tribes have a thorough understanding of the flora. The medicine men visited us at our campsite at Tamia, with their expert knowledge of herbs and spices, powders and potions that can heal anything from the common cold to aches and pains,  indigestion to allergies, depression to diabetes. The traditional healers or Bhumkas as they are called have a cure for every ailment, extracted from nature. Later at the campsite at Tamia, we met the men again from the village when they donned another avtaar - in colourful costumes as they danced for us and sang songs narrating more legends. While most dances are typical of their tribes, they are different themes such as fertility, and ritualistic dances such as worshipping nature and wars.  However the two main dances are classified as Bhadam or Bharam and Saitam or Setam. Bhadam dances are largely performed by male dancers especially during weddings and they include percussion instruments like the traditional dhol with timki and cymbals.  Saitam is more vibrant and includes both men and women while the dhol is performed by a man dancing at the centre of the group. The other dances are called Saila and Ahirai.

As the sun came down at Patalkot Valley, darkness slowly descended in the valley as there seemed to be no transition between twilight and night. As we huddled together in the matadors, I couldn't help but think how we have forgotten the essence of simplicity and sustainability in our lives. Located 78 kms from Chhindwara district headquarters and 20 kms from Tamia, Patalkot Valley is nestled deep 400 meters below the picturesque Tamia. The River Dhudhi flows here and the ancient rocks here have been formed over 2500 million years ago. A few years ago, no one knew about the existence of this valley, but today it is facing threats related to deforestation. The native tribes- Bharias and Gonds have lived in Patalkot Chhindwara sustainably for years, collecting just enough herbs and berries, wood and bamboo for their daily sustenance, be it for food or shelter. However, while they are now emerging into the real world and are getting educated and are seeking better opportunities, I personally feel that it is important to ensure that the natural environment along with their customs and traditions are preserved. As travellers, we need to be responsible and sensitive and be mere observers without influencing their lives, while learning more about sustainability from them.

Have you been to a tribal village before?